Those of you who love DIY vacuum tube amp building have likely discovered old, unwanted, vintage electronics that have long be abandoned. If you’re like me you just can’t let these pieces go to the junkyard. After awhile the garage is stuffed with “parts” that have so much potential, but it’s difficult to figure out where to begin.

Coming up with a circuit to build using existing parts can be tough. I found that if I can take an existing circuit and make only a few changes, there’s a good bet I’ll get something quite nice without too much trouble. I had one such instance a few years back. Someone brought me an old tube amp from a home radio/phono console by Motorola, circa 1957. It was a push-pull 6V6 amplifier tube circuit on a nice compact chassis. It had a tube rectifier and two preamp tubes. It didn’t take long to realize this could become a nice Deluxe or Princeton inspired amp. The transformers were perfect and this was a big savings because iron is often what costs the most when building an amplifier.

I settled on the 6G2 Princeton circuit. In addition to the transformers there were a couple tube sockets that were still in good condition but nothing else that could be reused. I had a turret board from an old project from 20 years ago that was used. All of the capacitors I used were new though. I didn’t see any point in using old/used caps only to increase the odds of a problem. Resistors used were what I had on hand – a mix of carbon comp, carbon film, and metal film. I removed the two prong power cord. Using a nibbler cutter tool I made an opening to mount an AC inlet for a 3-prong cord. On the front and back of the chassis I needed to drill a few holes for the input jack, speaker jack, and all of the controls. I also added a bias test point on the rear. This was an afterthought and why I didn’t also add access to the bias trimmer pot from the rear. Perhaps one day I’ll revise that. After all the holes were drilled, I spray painted the front with a hammer-tone type paint that has a cool vintage look. I opted for new pots to avoid the headache of dealing with noisy old pots in the end. Strangely, none of the knobs or jewels I had on hand were quite right so I sprung for new ones. If I wasn’t so fussy I could have done it with a mismatched set of knobs. 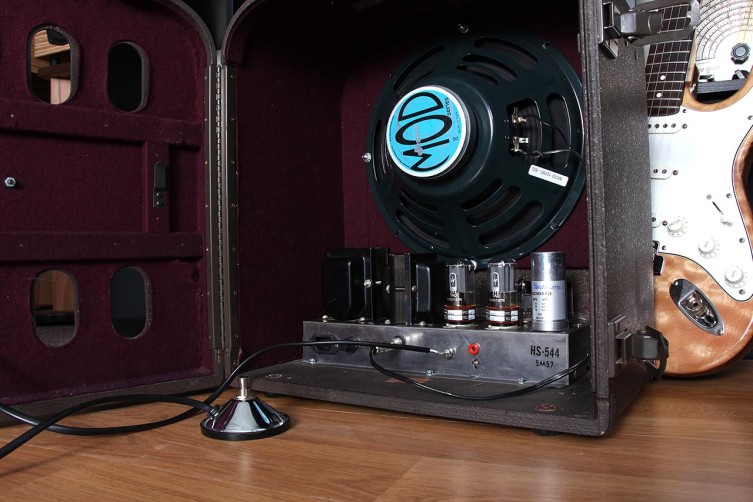 Next I needed a cabinet. I toyed with the idea of building my own, with nice tolex and all. Eventually I determined I was too fussy and not really interested in becoming a cabinet builder, so I needed some other plan. Discussing the project with John Templeton (Hamilton amp builder and good friend to thetubestore.com), he mentioned that he had something I’d want to see. Shortly afterward he dropped by the store with exactly what I needed. It was an old Bell & Howell home projector extension speaker from around 1960. It had a beautiful arched top and styled front, and made for a 12” speaker. It was perfect! The back of the cabinet opens on a hinge and is secured with luggage latches. It was in mint condition, the original paint and cloth were perfect. With a fairly simple cut and router job we made an opening at the bottom. We added some gold piping around the edge, secured the amp chassis from the inside, and voilà! I had a new/ recycled /vintage guitar tube amp!

The original speaker wasn’t in great condition so I replaced it with a Jenson MOD speaker that sounds surprisingly good for its price. I’m hoping to find an old speaker one day that’s in good shape (and cheap) to replace the Jenson.

This project was a lot of fun and turned out great. If you have the patience to build up a store of old tube electronics, you’ll find building a tube amp out of salvaged and junkbox parts are not too difficult.   Sure you’ll likely need some new parts too, but finding old chassis’, transformers, and cabinets can be a huge savings and add a lot to the “cool” factor. 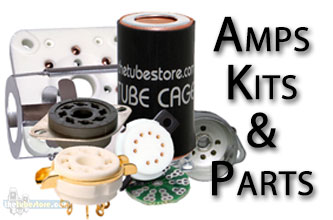 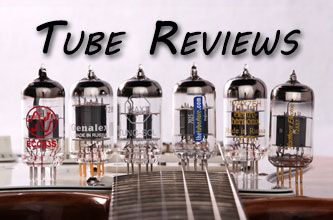 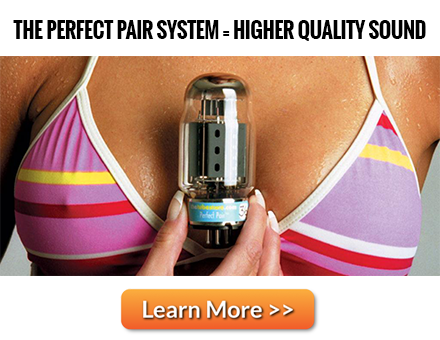