Anyone that follows the trade magazines and net publications, knows that the music business is changing at all levels. More people are taking charge of their own destiny and pushing into Indie production. There are many reasons.

In my experience, live music is moving into smaller venues as the dance and hip hop scene expands into big dance clubs. Lots of musicians that used to play out are venturing into other, related, activities. This includes small recording studios, teaching, church music and of course intimate performances in smaller venues.

Smaller venues will no longer smile as you roll in your half-stack. They worry that loud music isn’t going to do well in assisting with food sales and casual conversation amongst the patrons. And let’s face it, they’re right.

Unplugged sets, or performance using low powered sound systems is popular in more upscale establishments. To address this issue, many amp manufacturers have brought out low power or micro powered products. The micro amps are really great for practice and amazing your friends, but I find they lack warmth and can sound ratty.

The classic low power amp has to be the Tweed Fender Champ. They have been used by students and rock stars alike. Not often used for clean sparkle, they come into their own when crunch and drive is required.

Great for home use, and an often used recording tool. The internet is full of stories that will attest to this. What makes them great is the very simple design of the circuit. It’s a typical class A single ended design that delivers the honest truth.

The class A designation is valid for a champ, unlike many other amps that claim class A. There is a single output tube that conducts the signal for the full 360 degrees. For technical reasons, the output transformers used with single ended amps require a different physical design. Using one side of a push pull output transformer will usually result is smoke.

I wanted to see what builders were doing today, and how the single ended combo was evolving. The biggest change I found was designs can now accommodate different output and preamp tubes or rectifiers with no adjustment. Plug and play. Good examples that come to mind are designs by THD in the Univalve and Bi-Valve series. Not only can you change tubes but you get a power soak and lots of other features to play with.

I selected a Swart STR-Tweed Amp for this test. It’s all point to point construction and uses good quality component and big transformers to deal with the varying requirements of different output tubes. It’s cathode biased for plug and play. The cathode resistor and bypass cap are a compromise to ensure compatibility between tubes. They use the same 25uf@50V for the cap and a 560 Ohm resistor. You will see in the numbers that this proved to be pretty good for every tube.  Output is into a 12” Swart speaker similar to a Vintage 30.

For each combination of output tube and rectifier, I measured certain key voltages in a bench test. Those voltages and subsequent test readings were used to calculate power output at a low, clean, setting and finally the maximum power output. The stock speaker was used in all cases.

The sound clips were done using an AKG c214 microphone and recorded at 24 bit 48k. Since its plug and play, we set the amp up at a fixed output level and only changed the power tubes and rectifier. The guitar used was a 57 Goldtop historic. The quiet tone was the result of rolling off the guitar volume. The driven tone was the guitar turned up all the way. Each configuration was later bench tested to compile voltage, current and power. There’s a table to review the way tube changes affected the amp.

The clips are not long, just a few seconds. But you can match the sound of those clips to the amp picture and test result.

Check out the numbers and have a listen. Can you hear the difference?

In this configuration the amp needs 450 ma of heater current for the output tube and has a maximum clean output of 2.9 watts before any compression is seen on the oscilloscope. Maximum output was 6.8 watts. This is our baseline for comparison. 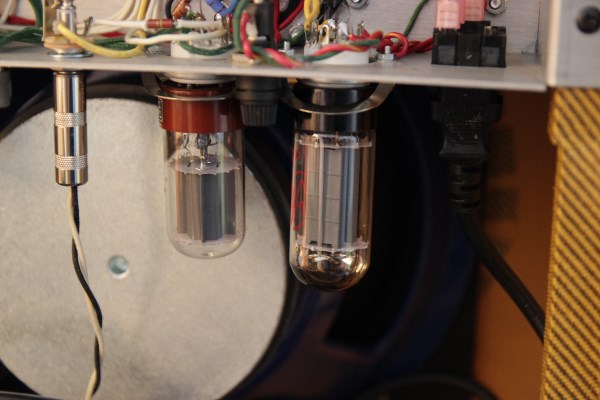 In this configuration we have increased the supply voltage using the GZ34. The output tube now needs 900 ma of heater current. There’s about 30 volts increase from the 5Y3 configuration and you can see it in the table. Maximum clean output is now 3.64 watts and maximum output is 8.3 watts.

This configuration yields results similar to the 6L6. At this point we have increased the heater current demand to 1.8 amps for the output tube and are seeing that the extra current is holding the supply voltage down. The heater voltage has been pulled down slightly from a nominal 3.2 volts per side to 6.15 volts. The screen voltage has dropped and this is likely due to the screen grid drawing extra current in this tube. 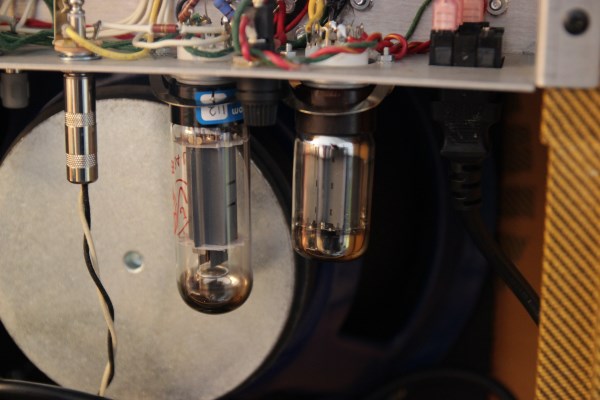 Just for fun, I took this final sample and added processing that would typically be used in a studio. A bit of reverb, a little compression and suddenly it doesn’t sound like a little amp anymore.

You can do a lot in the studio if you start with a good sound. Smaller amps are versatile and can emulate the big rigs when recording.